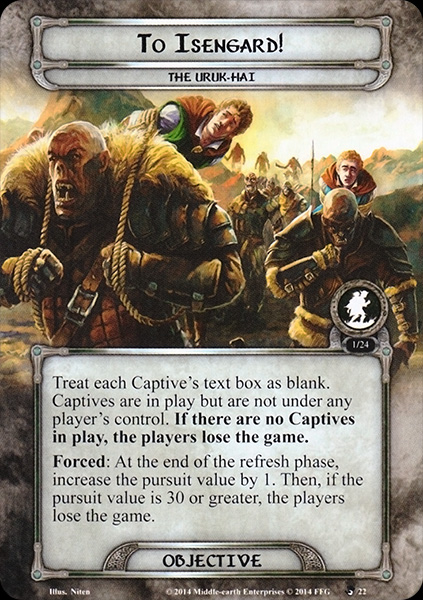 Encounter Deck Set-up:
Add To Isengard! and Ugluk to the staging area
Shuffle Pursued by the Enemy and Followed by Night into the encounter deck.
Place Merry and Sam under To Isengard!

Set the pursuit value to 10

So we’re a hero down, which means I really need so resource smoothing and generation. Here I’ve got one of the first (Roheryn), but none of the second, so I’m going to have to Mulligan.

Now this is more like it! Roheryn and Sword that was Broken will open up both Tactics and Leadership on Aragorn when I get them on him. This means Steward of Gondor will serve us best on Aragorn because he’ll be swapping between the two decks, helping to spread the love.

Starting Hand:
Ring of Barahir
Secret Vigil
Song of Travel
A Test of Will
West Road Traveller
Escort from Edoras

Again, resource smoothing is sorely needed, and we have some here. Obviously the Ring of Barahir is for Aragorn to play with, so now he’ll be opened up to pay for both Leadership and Lore cards from Deck One. Song of Travel will go on Faramir and we’ll hold out for Celebrian’s Stone from Deck One to open up Spirit for him. If we find a second Song however then that’ll serve the same purpose. A Test of Will is also welcome, as are the two cheap questing allies. With Secret Vigil to reduce the threat in the staging area, really this is almost the best opening hand I could have asked for, bar a Foe-hammer, or maybe a Blade of Gondolin for the extra progress.

Raise each players threat by 1 for the Fallen Hero Gimli 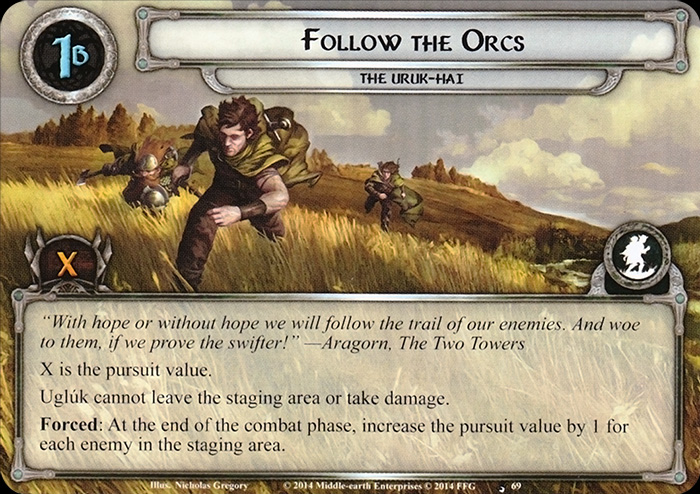 This’ll go on Aragorn. With a hero missing from each deck, the son  of Arathorn will need to pull double-duty and cover as many bases as possible.

Solid attack boost, never say no to this one.

We’ll save the resources for later on I think

Again, we’re keeping a resource, this time for A Test Of Will 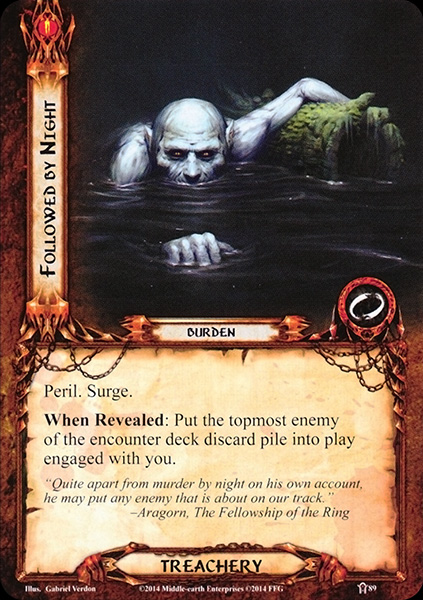 1: Isengard Uruk (2 threat) (We’ll take the three damage. I hate revealing additional encounter cards) Deal 1 damage to Faramir, Aragorn and Glorfindel
2: Followed by Night (This happened last quest too. It whiffs but we still get Surge to deal with)
2.1: Plains of Rohan (0/4, 1 threat) (Not a terrible draw, but it can only get worse)

Win by 8, explore Eastemnet, place 5 progress on Stage 1B. Trigger Eastemnet, add to resource to each hero. Return Naith Guide to hand.

That was a pretty good round, no devastating cards. I doubt we’ll be able to keep up this pace however.

Encounter Phase
I think we’ll leave the Isengard Uruk up in the staging area for now. We can’t really take them out in one shot and we’ll be better off tanking the archery without suffering additional damage on top from their attack

Increase the Pursuit Value by 2

We’re catching up, but only slowly.

So far so good, but we need to get in more allies to keep up the pace. 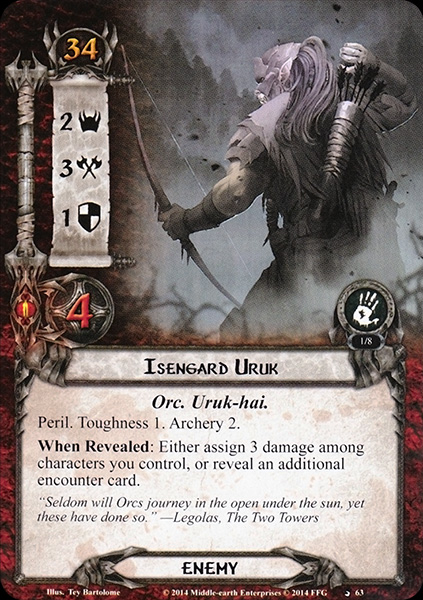 Excellent! We’ll give this one to Aragorn, try and turn him into a Voltron hero!

A cheap and dirty ally? Don’t mind if I do

And now it’s just the Tactics sphere to go for Aragorn and he’ll have all 5 spheres!

We’ll start with the most fragile first. 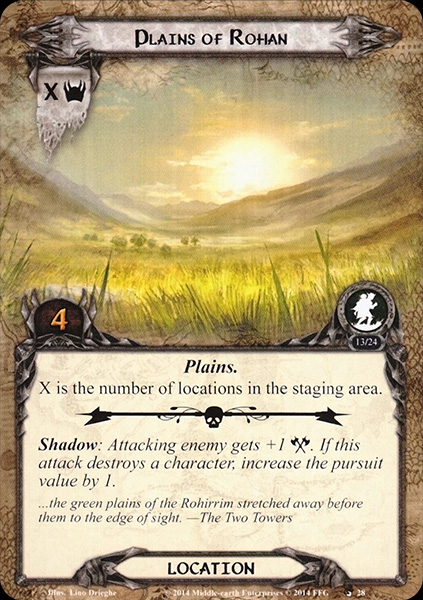 1: Plains of Rohan (0/4, 1 threat) (And there’s another one! Good thing we traveled to the first one when we had the chance)
2: The Wold (0/2, 2 threat) (Not ideal, as this boosts Plains up to 2 threat, and the travel cost isn’t really helpful, but it could have been worse)

Win by 8, explore Plains of Rohan, place 4 progress on Stage 1B

So we’ve made up 2 progress on the encounter deck this turn, 2 last turn, we’re getting there! Slowly! 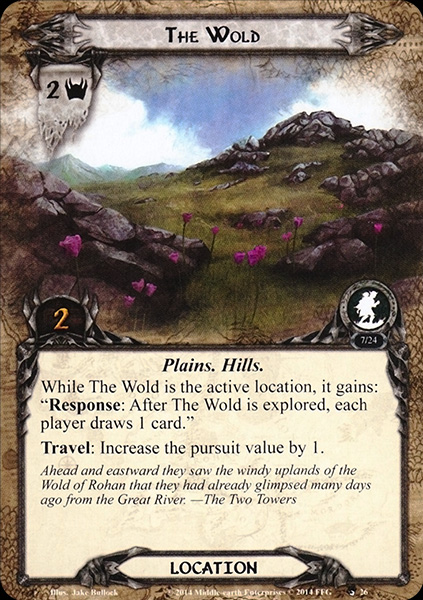 I’m getting an idea. Bear with me a moment

I think this may have to wait, until the plan is implemented

I feel like I’m treading water with these two

Now all we need is 1 progress for bonus cards and resources. Also there’s a smaller progress barrier before the main quest stage.

Hopefully this’ll be enough to get us that bit closer.

1: Saruman’s Orders (Not bad, the essential effect is that it surges…for both players? That’s it, nope) Deck Two plays A Test of Will to cancel Saruman’s Orders)
1.2: Eastemnet (0/3, 2 threat) (So apparently we’re getting all the locations. All of them.) 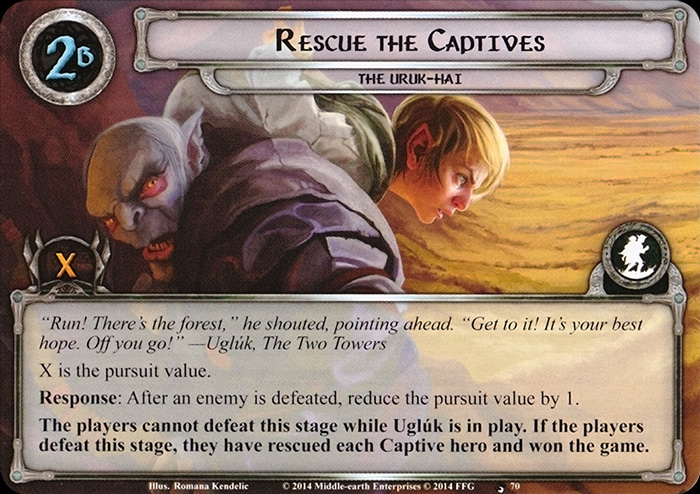 Win by 11, explore The Wold. Trigger Ranger Provisions, trigger The Wold. Deck One: Warden of Healing (This will be much needed as the archery will begin to stack up). Deck Two: Westfold Outrider (A decent attacking ally will be appreciated in the coming fight, it’s engaging ability is also handy as we’ll be able to keep Ugluk engaged with Aragorn next turn) Complete Stage 1B, trigger Stage 2A. (Whoops. Now we have all the Uruk-hai!) Search the encounter deck for Ugluk’s Uruk-hai and Isengard Uruk (We’ll eat the detrimental effects because these 2 have higher engagement costs). Increase the Pursuit Value by 3 and deal 1 damage to Faramir, 2 damage to Celeborn.

Well that was a busy phase. Hopefully we can stand up to the fallout.

We’re on 19 now for the Pursuit Value, but once we get Uruks killed we can start dropping it. 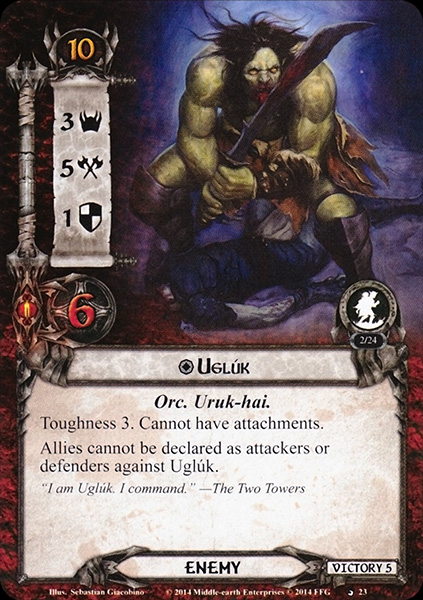 Our only choice is to allow Elladan to take the damage and get the Wardens to heal it up next turn.

We got lucky there. Not only did we avoid losing a hero, but we dodged a nasty treachery to boot. 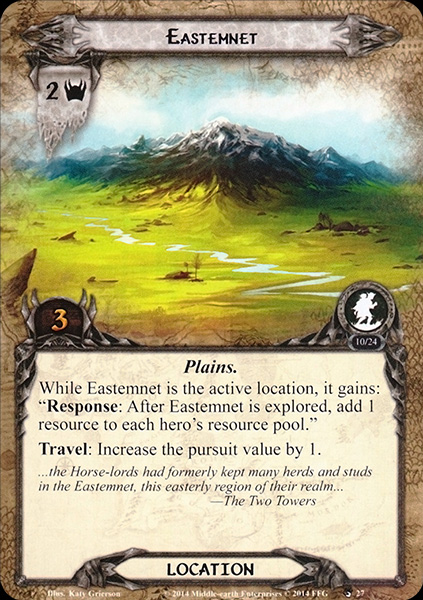 Well it is about time! Welcome to the party

Well you are coming right into play

Now we have the twins!

Deck One:
Warden of Healing
Anduril-Aragorn

More boosts for Aragorn, and we can start to chip off some of these wounds 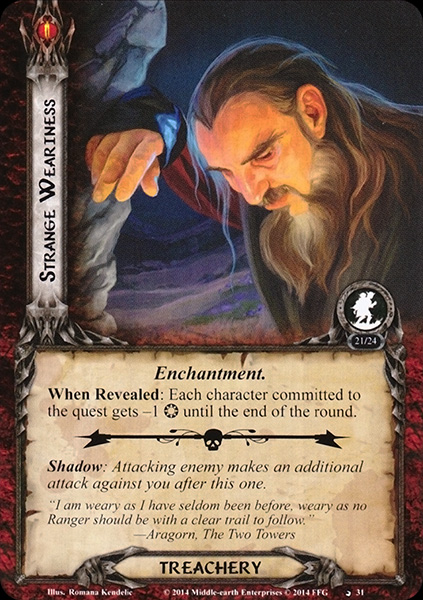 That boost from Sword that was Broken is incredible!

1: Strange Weariness (And that boost just goes away again!)
2: Banks of Entwash (0/5, 3 threat) (And that’s another boost for Plains of Rohan. I’m starting to not like that card)

Win by 3, explore Eastemnet. Trigger Eastemnet, give 1 resource to all heroes

It’s time for us to be rid of this

Let’s try and clear out some archery 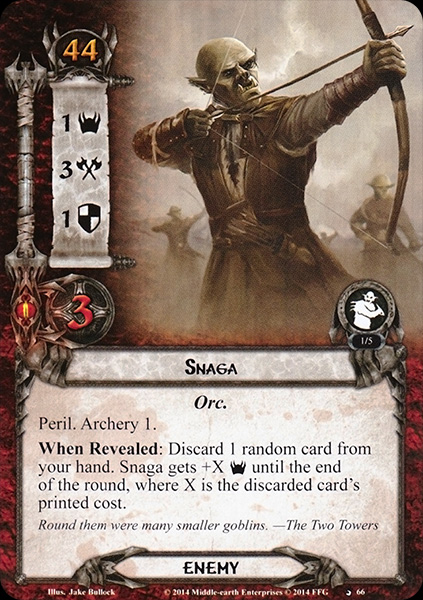 Not too shabby a turn if I do say so myself. Ugluk is down, archery is reduced and the Pursuit Value will be at 19 after the refresh phase, giving us plenty of time. I don’t trust the encounter deck though. Something will go horribly wrong, mark my words! 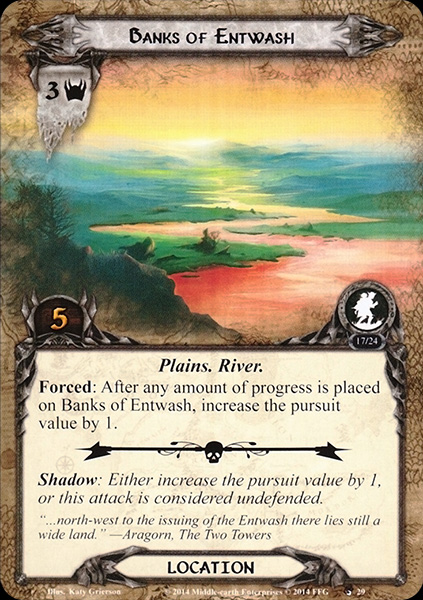 So is this card going to be Aragorn’s version of Frodo’s Intuition? I guess we’ll find out soon

Planning Phase
Deck One:
Roheryn-Aragorn (He’s got 5 spheres! Is there an attachment to give him the Baggins sphere at all?)

And we’ll keep the rest for the quest phase.

Reduce their threat for a big push here

Deck One plays The Three Hunters on Faramir, Aragorn and Elladan.

Surprise! Now let’s gamble again…if we get a Strange Weariness, Unseen Barrier, or even too many enemies we will be scunnered. But…but if we can pull this off then it’s a win. 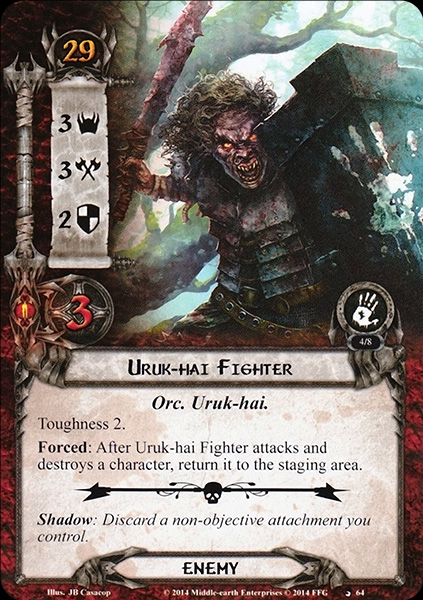 Win by 24, explore Plains of Rohan, complete Stage 2B

The Uruk-hai have been overtaken and the hobbits have been rescued. I think we got off lightly enough with this scenario, we didn’t draw any treacherous limiting our progress, the enemies came off at a steady pace and there was no Grishnakh! The encounter deck still gave us a run for our money, I was taken aback by the amount of archery we had to deal with, and it nearly overwhelmed us. If it hadn’t had been for the Wardens of Healing then we almost definitely would have been.

I am pretty happy with my decks, even though everything is going to change now. Again, I think card draw is an issue that needs to be addressed, especially when we move on to the more combat intensive quests that are upcoming. As for the Boons we have earned, I don’t feel that bringing back Gimli is something I’d be desperate to do, not while I can’t think of some suitable excuse that works thematically. So from the other Boons, Hands of a Healer is useless for us because we have no healer heroes. Resource generation is not as much of an issue, Steward of Gondor will follow whichever set has Faramir (Frodo or Aragorn), and there are plenty of heroes who can help with resource generation so I’m less inclined to go for Leader of Men. So that leaves Intimidation and Forewarned. Of the heroes we are taking forwards, only Merry can take Intimidation. And that leaves Aragorn and Sam as heroes with the Ranger trait. Aragorn, rather than Sam, is set up better as a defender, and will come under fire more often. It would be better then to put Forewarned on Aragorn, that we can make the best use of Anduril as we possibly can. What do you think about the boons we’ve picked up? Should I have resurrected Gimli? Who should accompany Frodo when we rejoin him in Emyn Muil?